Looking for a safe and enjoyable driving experience with your family? These cars will give you exactly that.

Life can be expensive, and budgeting pressures tend to increase when you have children. This may make you keen to cut costs when purchasing a new car, yet you probably don’t want to sacrifice safety or practicality if your vehicle will be an integral part of your family life. We’ve combed through a wide selection of vehicles to find the best contenders, whether you’re after an SUV, a minivan or something more compact. This list of affordable family cars will allow you to achieve the perfect balance. 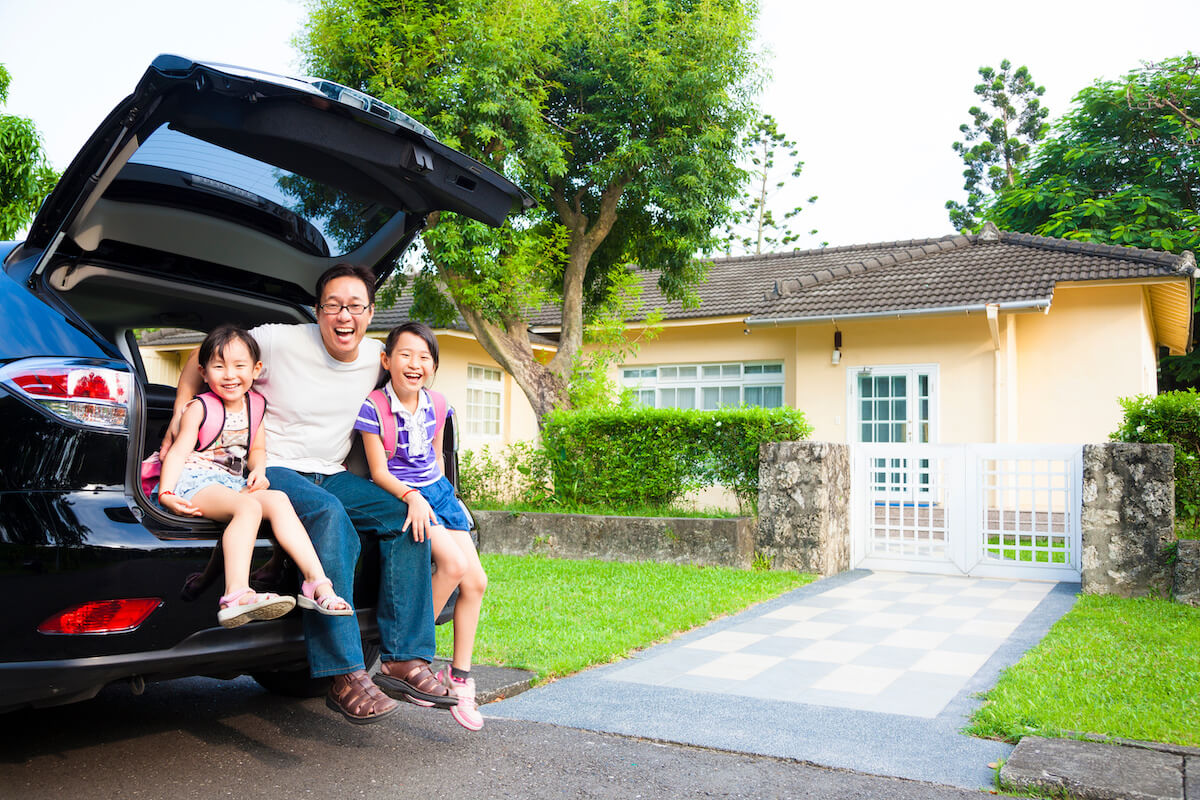 There are a few ways to make buying a car possible with budget limitations, whether you negotiate the price or opt for an auto loan to help you split the payments over a longer period. But today, we’ll be focusing on perhaps the most crucial factor of all: choosing a model that gets you the most bang for your buck.

We’ve chosen the 13 cars below based on whether their price justifies how family-friendly they are in other aspects, such as cargo room and safety features.

The focus is on new cars (2022 or 2023 models), so bear in mind that you may encounter subtle differences if you buy a used car with a different model year.

With that out of the way, let’s get to the good stuff — our picks for the most affordable family cars.

The Nissan Rogue Sport is a midsize SUV, but it has plenty of room for most families, with around 61 cubic feet in the cargo.

It costs around $7,373 for maintenance in its first ten years — while this sounds like a lot, it’s more affordable than the average SUV. It also has reasonable fuel economy for a vehicle of its size, using around 25 mpg in cities and 32 mpg on highways.

This model also stands out due to its impressive suite of safety features, including warnings for blind spots and forward collisions and automated braking.

There are also lots of safety features from the Honda Sensing suite, including collision mitigation braking (which gives alerts about potential collisions) and automatic high beams.

Its fuel economy is around 30 mpg on city roads or 38 mpg on the highway.

The latest model of the Jeep Grand Cherokee departs slightly from earlier versions with a fancier aesthetic. It’s still a great SUV, whether you want to go off-road or cart the kids around. And with enough space for six or seven people, you almost couldn’t ask for anything bigger.

It has various driver-assist features to keep everyone safe, plus a voice assistant that allows you to activate basic features like windshield wipers.

Finally, its V6 engine offers power without too much expense, offering a fuel economy of around 22 mpg.

Sedans used to be the staple car for American families. While many consumers are now opting for SUVs or other bigger vehicles, if you want to keep things classic, you’d be hard pressed to beat the Toyota Camry.

With five seats and a nice big trunk (15.1 cubic feet), it’s big enough for the needs of most families. It also has a fuel economy of around 28 mpg for city roads and 39 mpg for highways, which beats most SUVs.

The icing on the cake is that it only costs around $4,203 for car repairs in its first ten years, which is significantly below the average for sedans.

The Chevy Equinox is a good-sized SUV that ticks most boxes for its category. It's an all-wheel-drive vehicle and has almost 30 feet of cargo space in its trunk — even when all passenger seats are occupied.

There are plenty of special features, too, such as a touchscreen to handle multimedia. A standout is the teen driver system, which helps teenagers to improve their driving skills without your help by giving them a “report card” based on factors like speed and stability control.

It has a fuel economy of around 26 mpg in cities or 31 mpg on highways.

The Ford Escape is a compact SUV with two rows of seats (five seats in total), lots of cargo space and an impressive infotainment system. You can also choose between a front-wheel drive or an all-wheel drive option.

It has a fuel economy of 28 mpg in the city, and closer to 34 mpg on highways.

As far as affordable family cars go, it doesn’t get much better than Kia models. Many of them make great choices for savvy shoppers who don’t want to break the bank, but we had to narrow our pick down to the Kia Sorento. It has three rows of seats and good fuel economy for an SUV, at between 20 and 25 mpg for most journeys.

One thing to note is that its Android Auto and Apple Carplay are fitted as wired versions in this car, which can be annoying if you’re used to wireless.

If you’re looking for a minivan with great value for money, the Chrysler Pacifica should be on your radar. Despite being a van, it has a luxurious, elegant design — especially the top-tier model.

It has an estimated fuel economy of 22 mpg, plus plenty of safety features — from full-speed forward collision warnings to an emergency braking system for pedestrians.

The Acura MDX is a good-sized SUV with a fuel economy of around 22 mpg. It has a flexible design that allows you to either leave the middle seat upright in the second row to fit in more people or put it down to make the car more roomy.

Plus, it was named the 2021 Top Safety Pick by the Insurance Institute for Highway Safety.

The Subaru Crosstrek is a fantastic choice for anyone who expects to spend a lot of time driving through tough terrain. It has all-wheel drive and special features like ground clearance, hill descent control and water repellency.

You won’t be short of room either, with more than 100 cubic feet of space and a cargo volume of 55 cubic feet. The fuel economy is better than you might expect too, with 28 mpg in cities and 33 mpg on highways.

If it’s an SUV you’re after, the Hyundai Tucson is a great bet for many. With 38 cubic feet of space behind the rear seats (or about 75 cubic feet if you fold the seats over), there’s room for all the family and then some.

Plus, the latest 2022 version comes with an attractive exterior and interior styling that are bound to appeal to anyone looking to impress their friends and family.

As for fuel economy, it averages around 26 mpg in the city and 33 mpg on the highway, with slightly lower figures if you go for the all-wheel drive option.

While the Mazda CX-9 is pricier than some of the other entries on this list, we had to include it for being large and fantastic to drive, with great braking systems. It has a fuel economy of around 23 mpg and a powerful 4-cylinder turbo engine.

Another standout feature is the size. It’s a three-row SUV that can seat up to six people, although you can only access the back row by folding the center seats forward.

As with the Mazda CX-9, the Volvo XC60 may not be deemed super affordable (although you may get a good price if you buy used). Still, it may be worth making the investment for the safety it offers. It has standard features like emergency braking, but also more advanced features like alerts for cross-traffic.

Plus, as a five-seater SUV, it has plenty of cargo space, and its fuel economy tends to lie between 20 and 30 mpg.

Drive off into the sunset 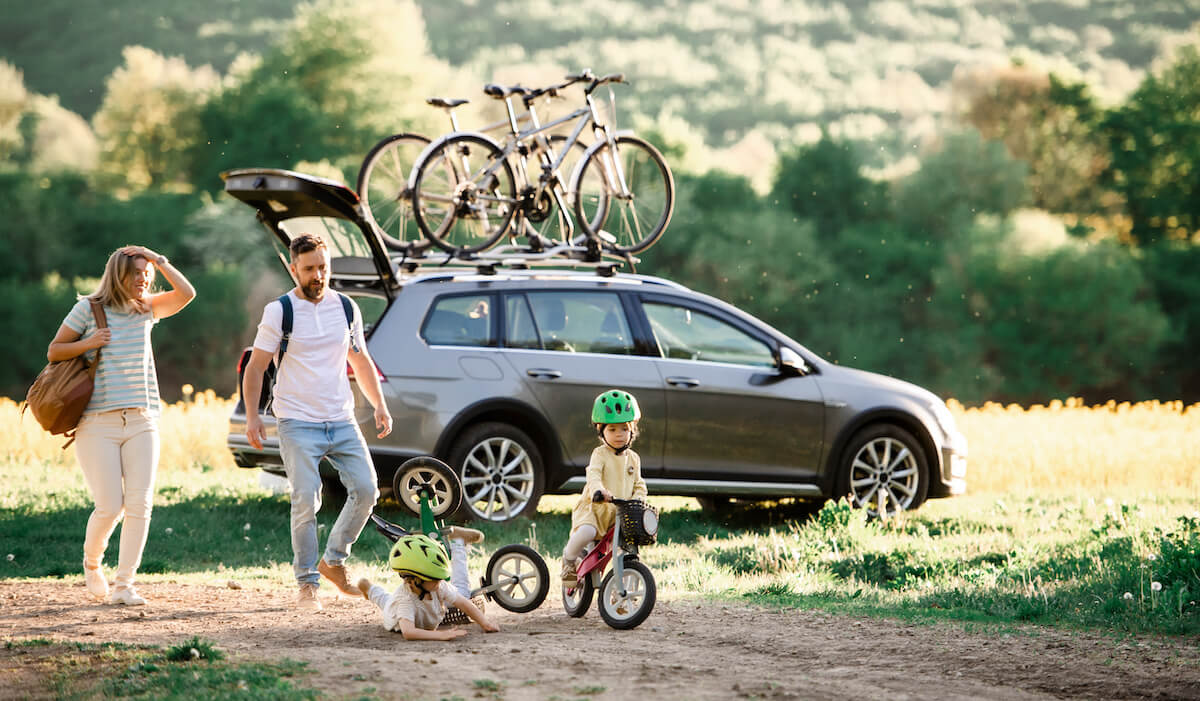 The affordable family cars above have what it takes to make the whole family happy. Whether you want an off-road SUV for adventures with the kids, a flashy minivan to take the extended family with you or a vehicle with top-of-the-range safety features, there should be something to suit here on this list.

If you currently have credit card debt, you may want to tackle it before making the big financial decision to buy a car. Check out the Tally† credit card repayment app, which can help you do this as efficiently as possible. The app takes your higher-interest credit card debt and combines it into a lower-interest line of credit so you can pay it off more quickly.

Read more about What Credit Score Do You Need to Buy a Car?

What Credit Score Do You Need to Buy a Car?

What Credit Score Do You Need to Buy a Car?

Read more about How to Sell a Car With a Loan: Prepare and Choose Your Route

How to Sell a Car With a Loan: Prepare and Choose Your Route

How to Sell a Car With a Loan: Prepare and Choose Your Route

Read more about What’s the Average Down Payment on a Car, and How Much Should You Save?

What’s the Average Down Payment on a Car, and How Much Should You Save?

What’s the Average Down Payment on a Car, and How Much Should You Save?