Average Christmas Spending Per Child in 2021 — and Tips to Budget

Comparisons are the thief of joy, but it's normal to be curious about what your peers are spending. But that doesn’t mean you can’t be more frugal.

As much as we tell ourselves that the true meaning of Christmas isn't about the presents, nobody wants to say “no” to their children or make them feel like they’re getting less than their school friends. You only need to look at the average Christmas spending per child in 2021 to see that many families are willing to stretch their budget to the max during the holiday season — even if it means going into debt.

We'll give you all the stats you could hope for when it comes to Christmas spending habits in the United States and other developed nations. Then, we’ll move on to a more important question: What can you do to keep your spending down and enjoy a debt-free Christmas?

Average Christmas spending per child in 2021 in the U.S.

There’s no obligatory census that requires parents to tell the government how much they spend on their children over the Christmas season, so it’s tough to get information that’s truly representative and accurate. However, there are a few reports that have studied the Christmas spending habits of a sample of Americans.

According to CreditCards.com, the average U.S. parent planned to spend $276 on each child under 18 in 2021. And a Parenting.com and Today survey of mothers had similar results, estimating the average Christmas spending per child in 2021 was $271.

As a bonus stat, a report from OppLoans found that the average grandparent spent $218 on holiday gifts for each grandchild. Grandparents from Oklahoma topped the list, reaching $339 per grandchild.

Overall, the National Retail Federation (NRF) reports that the average spending for U.S. consumers was $997 over the holiday season, including the entire gift budget and other expenses such as festive food and drinks.

Surprisingly, the pandemic didn’t seem to significantly impact how much consumers spent on their Christmas gifts — retail sales remained strong over the festive period last year. 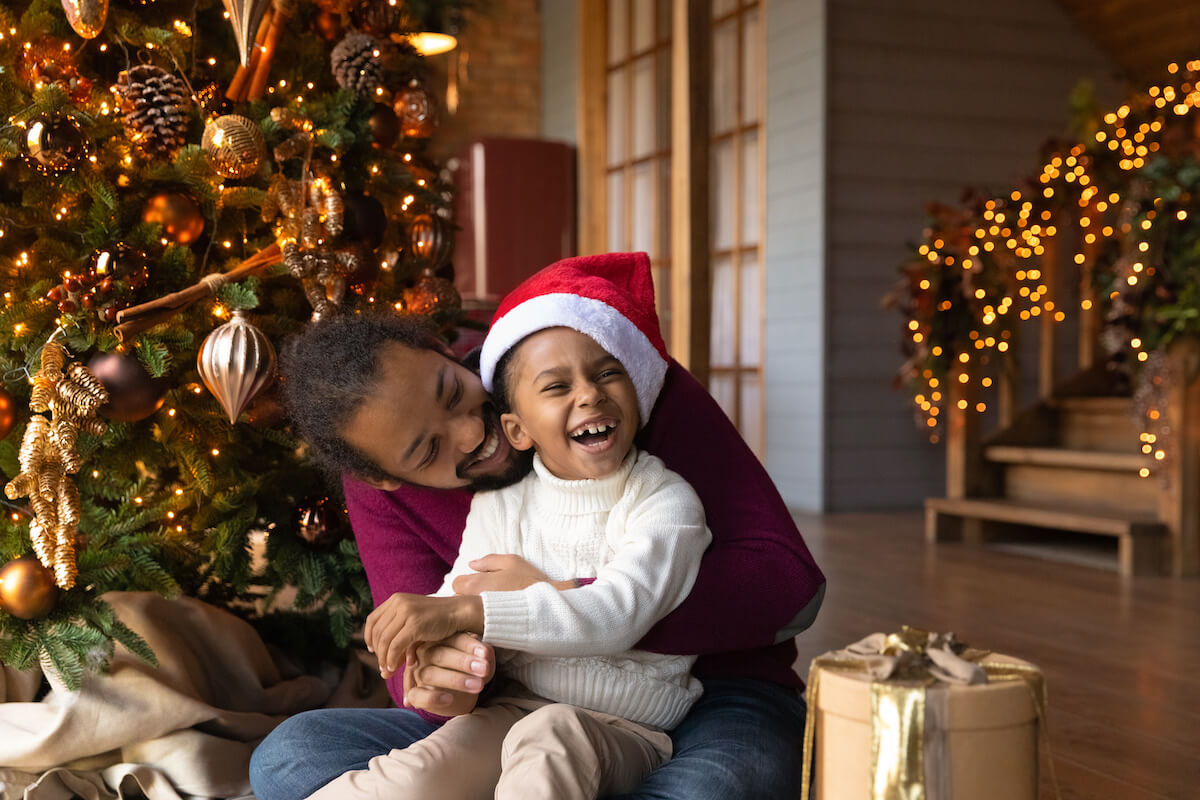 It’s easy to get swept up in your own country and culture, but there’s a whole world out there. So let’s look at some of the spending habits of other developed nations to see how U.S. consumers stack up.

World Remit studied the cost of Christmas in various countries and reached the following figures:

Naturally, not all of this expenditure is due to the cost of holiday shopping for children alone. So, how much do parents from other countries spend on their children?

What this means for your Christmas budget

There’s no rule saying you have to match the average Christmas spending per child in 2021.

Ultimately, it’s all about what works for you, and you’re likely to have different expectations depending on factors such as:

There’s no issue with spending a lot on Christmas if you can afford it — but if you’re splashing the cash beyond your means, you may want to rethink your approach to the holidays.

Going back to the CreditCards.com survey, around 40% of the respondents were willing to go into debt to cover the costs of gifts.

Taking out a loan to spend more on gifts might give you an amazing Christmas. But is it really worth it if it puts you in a worse financial situation in the long run? Remember, if you go into credit card debt or take out a personal loan, you won’t just owe the original balance you spent on gifts for your loved ones. Instead, the interest will compound, and you’ll have to pay back significantly more over time.

Tips to make your Christmas a success without debt 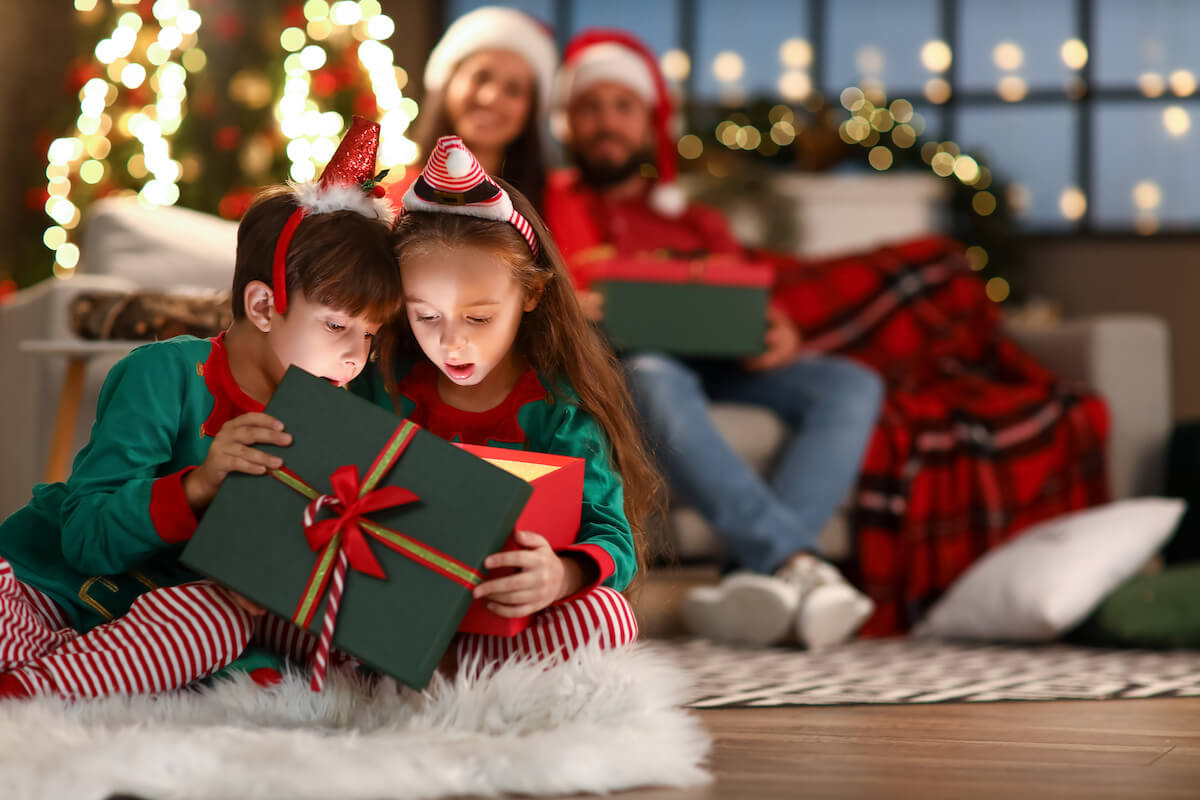 Many people take on debt to fund their gift-giving for one simple reason: They want to buy everything their children were hoping for, but they realize their money doesn’t quite stretch as far as they had hoped. As a result, debt seems like the only option.

To avoid falling into this same trap yourself, you have two main choices:

Or maybe even a bit of both.

How to plan ahead for Christmas

With proper planning, almost anything is possible. For example, if you saved just $50 every month from January to November, you’d have $550 to spend on gifts by Christmas. Double that, and you’d have $1100 for your holiday spending — that’s more than the average American spends.

However, to get the best possible outcome, you need to be specific about how much you personally are likely to need toward your Christmas shopping.

To make a proper Christmas budget, apply the following steps:

The time of year you start saving for your Christmas presents makes a huge difference to how much you can save. Leave it until November and you’ll have to cough up hundreds every week instead of a couple of hundred each month.

However, if you’ve done the calculations and avoiding debt still doesn’t seem feasible, there’s an extra course of action you can take.

Many parents feel instinctively guilty about cutting down on their Christmas budget, but spending less doesn’t necessarily mean your day will be worse.

While children love opening as many gifts as possible, they don’t necessarily benefit from having a greater number of gifts (or more expensive ones) once the instant gratification of unwrapping is over.

In fact, one study found that giving too many gifts can have a negative impact on the concentration and creativity of young children. Some swear by the rule of four, which says that you should give four gifts to your children, each with a unique purpose:

This approach encourages your child to put some thought into the gifts they want the most rather than writing a wish list of hundreds of items they like the idea of.

You could also cut down on your spending by making the most of coupons, sales, cashback and other methods that help you find the best price.

Will you be naughty or nice?

The holidays are about more than just what Santa puts under the Christmas tree, but many parents want to give their children everything they wished for. So if you’re planning on spending anything close to the average Christmas spending per child in 2021, make sure you manage your budget carefully and plan ahead.

While you’re assessing your finances to avoid debt over the holidays, it’s a good idea to pay attention to any debt you currently have — it will help to make your holiday saving easier for next year. The Tally†credit card repayment app helps you tackle credit card debt by taking your higher-interest credit card debt and turning it into one lower-interest line of credit.

Keep the Holidays Debt Free With This Christmas Savings Plan

Keep the Holidays Debt Free With This Christmas Savings Plan

Read more about 4 Wise Ways to Spend Your Christmas Bonus