This recent college grad ditched $5,000 in credit card debt and started saving for the future

Melanie vividly remembers the first moment she learned about Tally.

“I had dug myself into a hole and was completely out of ideas,” she says. “When I learned about Tally, I thought, ‘Of course, I’m going to try this. There’s absolutely no reason not to.’”

That “hole” was more than $5,000 in credit card debt, spread across multiple cards.

Like so many other Americans dealing with credit card debt, Melanie was simply looking for a little bit of help. She came across Tally — and that’s when things started to change.

Melanie’s credit card hiccup goes back a few years, to 2015, shortly after she graduated from college. She had just moved to Austin, Texas, after a three-month backpacking adventure through Central America. Melanie worked full-time during college and put herself through school, so the trip was a way to treat herself.

“I made a spreadsheet that had cost of living, starting salaries and a ‘fun rating’ for a bunch of cities,” she recalls. “That’s how I landed in Austin.”

At 23, Melanie found herself in a young, vibrant city with excitement and entertainment around every corner. That entertainment, however, came at a cost.

“I opened a credit card and started using it to get by,” she says. “There was this initial shock of having a limited amount of money but an unlimited amount of things to do. I started overspending and living beyond my means, and it slowly started to add up.”

Sure enough, Melanie wound up maxing out her credit card. But it didn’t faze her. She downplayed the problem and told herself she’d pay it off. But then, new problems started popping up.

“My dog got sick. I’d get a flat tire,” she says. “Any little progress I made would be wiped out. Plus, the interest rate on my card was high.”

With $3,500 in credit card debt, she decided to open a balance transfer card with 0% APR for the first year. She transferred half of her existing debt to the new card and focused on paying off the remaining balance on the initial card.

“Over time, I found myself with two credit cards that were maxed out,” she says. “Stuff just happens. Unexpected expenses pop up, and that’s what I was trying to reserve my credit cards for. I couldn’t afford to get sick, but it happened anyway.”

Melanie is far from alone in her experience. One of the more common pitfalls of balance transfer cards is failing to pay off the debt before the introductory interest rate expires.

“Balance transfer cards work great if you can pay down the balance before the promotional period ends, but that's just not practical for many people,” says Bethy Hardeman, Tally’s personal finance expert. “Unexpected things happen and, even when you prioritize paying down your debt, like Melanie did, balance transfers can end up costing more in the long run."

Turning to Tally in a time of need

With two maxed out credit cards, and in worse shape than before, Melanie felt defeated.

“The balance transfer card was my first attempt at ‘adulting,’” she says. “I knew I wasn’t supposed to carry a balance, but I’d tell myself it was OK and that I’d figure it out later. Until, one day, you realize you have to deal with it now.”

That day, while searching online with more than $5,000 in credit card debt, Melanie discovered Tally.

She immediately signed up and moved $4,000 of her credit card debt over to her Tally line of credit, which had a lower interest rate. Then, it came down to discipline. Melanie locked her credit cards in a drawer and tried not to think about them.

“I had an idea in my head that I wanted to be out of debt in a year and a half,” she says. “It was awesome having Tally suggest my payment amount. I think that really helped.

Melanie was almost always able to pay more than the minimum amount required and usually paid the suggested amount — and a few times paid even more than suggested.

“A lot of credit card borrowers pay just the minimum or a little bit more on their cards, based solely on an instinct that it's good to pay more. It's a gut feeling that doesn't lead to paying down debt faster,” Hardeman says. “Tally focuses on motivating debt payoff with payment recommendations that are more than the minimum and showing in real time how that impacts your time to be debt-free.” 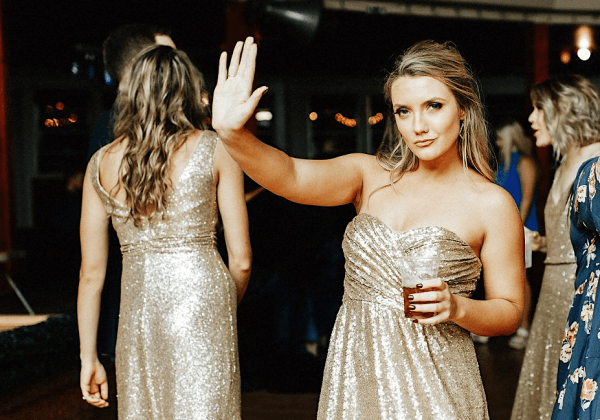 Melanie was able to pay off her balances in just 8 months and she remains completely debt-free to this day.

“Everything about my financial health has improved,” she says. “I can finally spend money and treat myself every once in a while without feeling guilty.”

Her credit score has improved to 790, too.

“I feel a million, jillion times better,” she adds. “Just the weight of having credit card debt sucks the life out of you. It feels good to have that debt out of the way and, hopefully, I’ll never have to deal with it again.”

Now 27, Melanie has since closed her balance transfer card but continues to use her original credit card for the airline points. She also opened a new card for the travel perks, but said things are different this time.

“I learned from my mistakes and pay my credit card off every month now,” she says. “I learned to live within my means and to use cards for the benefits.”

Melanie still uses Tally to manage all her credit card payments in one place. And that extra money she was paying every month above and beyond Tally’s recommendation?

“My savings is growing like crazy!” Melanie says. “My new savings goal is to know that, if I want to buy a house down the road, I’m able to do so. Tally is awesome, and I recommend it to everyone that I can.”